Hi, it's been a fairly quiet week. I'll be sharing some details of the systems that support the core of the game.

First off is the progress on Game Menus. I'm using a pretty common workflow here where I block out the menu functionality and broad layout using placeholder assets (these panel/button sprites are from the Dialogue System for Unity plugin) and ignore the art side of things as much as I can. The functionality of the system and the player UX can be discovered here, and art will be integrated in a later pass.

In keeping with multi-platform support, these menus can be navigated by Mouse, Touch, Keyboard, or Gamepad. One thing of personal importance here is a Button Remapper. This feature is a big one for accessibility, improving the game (or making it actually possible to play) for a lot of people. This is of the most important on PC/MacOS platforms where there's not a widely agreed upon keyboard mapping for games like this. I've failed to put Button Remappers in past games I've worked on (Fire Tonight, Fossil Hunters, etc) and regretted it.

Second up is a preview of my custom Tile System. I've written tile systems like these quite a few times now! You can see post from 2017 on GameDeveloper.com detailing the method used here. It's a complete rewrite of the Fossil Hunters tile system, with some new tricks and optimizations. The basic click-to-edit system works quite well to intuitively block out areas without overbuilding the editor feature.

Previously this tile system was stuck on generating only the BSP rooms-and-hallways algorithm, which is fine for a proc-gen roguelike but not really useful for the custom-designed levels planned here. Of course, that functionality is still in there as a future nice-to-have if I feel like adding endless levels for grinding etc.

Finally, the last bit of progress this week has been in Build Automation. Since I for some reason care about accommodating several platforms this early in development, I run the risk of wasting a lot of time waiting for builds to compile. So far, I've been relying on an Editor script that sets Build Options and sets a Build Pipeline to build players for each platform separately. This is a pretty good time saver, but this week I've been working to get these to run in a headless Editor build (these go faster without the overhead of the Unity GUI), building through Shell/Batch scripts, and looking into automatic uploads to (a private) Itch.io page through Butler. This kind of system worked really well with past games and Steam, so I expect Butler integration will be just as good, if not better. 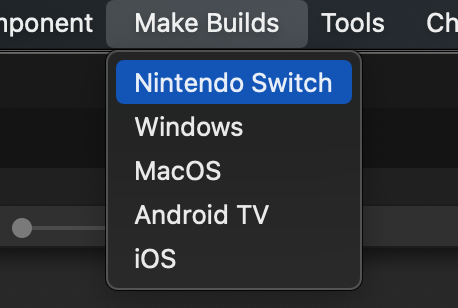 Speaking of platforms, I just today got a brand new Apple TV 4K 2nd Gen, and you can bet I'll spend some time testing out Krog on it.

That's all for this week! I'm getting pretty desperate to dive back into gameplay, so I'm planning to step back from these systems soon.